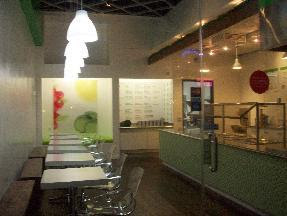 Melrose used to be a trendy place in Los Angeles until several years ago when the Grove shopping mall opened nearbye and sucked out the life out of this hipster's paradise.
Many of the hip and fun stores closed and the street started looking more like a ghost street.
Even the Hummus restaurant there like Wholesome Pita closed.

Now a new attempt is being made to open a new Hummus place with a twist and being a huge fan of Melrose I went to this place hoping that indeed they'll nail it.

The place is called Muma and the interior design and the way they serve shouts FRANCHISE. They are trying to do to Hummus what Pinkberry did to frozen yogurt.

Unlike many of the other Hummus restaurants which look like a cheap low class rundown diner- Muma has a cool and hip look which makes the tiny place feel much more spacious and fun.

They have fresh vegetables and salads that are made on premise and have interesting options for the Hummus.

The Hummus itself is good and interesting.

Their Falafel is fresh and made to order and their Pitas are also fresh.

The place is still brand new and caters to 3 different crowds:
Orthodox Jews living nearbye in La Brea/Melrose area
Israeli's working on Melrose
Vegeterians looking for a fun and tasty place in the Fairfax district.
Hipsters wanting a fast and clean meal on Melrose after shopping there.

One of the things that always dissapoints me with new places is how fast they surrender to mediocrity after the first few month's of existence.
This place is new and the two charming and charismatic owners are working there hard to make sure the food is fresh and tasty and hot for every customer.
The fans have noticed their hard work and the place is full most of the day.
I do hope they will stay this way and not give up their desire to make the best Hummus on Melrose.

Muma's is aiming directly for the Chipotle crowd. Those wanting a fast meal in a clean place that's both tasty, fast and hip but also will give them a full meal for under $10. Chipotle seem to have a lot of repeat customers that come there almost daily to eat cheaply.
Time will tell if the same concept will work for Mumma.

As they are located so close to the ultra Orthodox Jewish neighborhood of La Brea and Melrose they will hopefully attract some of the same crowd that used to go to Wholesome Pita. But in order to survive in the competitive Melrose Avenue they'll hopefully manage to get the hipsters to adopt this place to.

I'm keeping my fingers crossed for this place.
It's inspiring to see young people try to bring new life into a traditional meal in such an exciting way and especially in LA which is such a hard town to bring anything new to.

I also hope they don't fall into the trap of a lot of middle eastern places that eventually try to hike up prices believing Israeli's, Jews and Arabs are suckers. They might be for awhile but eventually all places that had crazy prices for Hummus went under. Hummus and Falafel are the Pizza of the middle east and as such should be priced accordingly.
As their new competitor on Fairfax, Pita bar and Grill turned from a sweet darling to a disgusting, stale Pita serving, lousy Hummus making place in less than 6 month since they opened and also hiked up the price and so lost quite a few clients in the process - I truly hope this sweet new place doesn't look at the conduct of the current crop of middle eastern restaurants but rather at what it could become- the middle eastern Chipotle chain.

Good luck guys and may the force of chickpeas be with you.