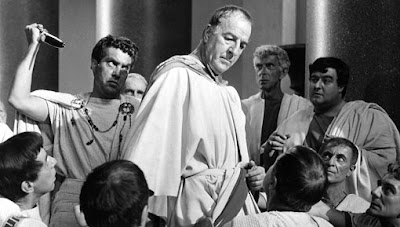 ES TU BRUTE are the last words of Casear, in Shakespeare's Casear.
The idea that you've been betrayed even by your closest friends.
Not just betrayed. Stabbed in the back. Killed by a friend's painful dagger! That's what I felt lately with Sabra's Hummus.
Sabra has been an old friend.
With all the chaos and instability in the world - Sabra Hummus has always maintained a high level of consistency and while it's never been a spectacular Hummus- it's always been good enough that it could serve as the go to Hummus when there was no other alternative around.

But the love story's gone.
The little magic their hummus used to have is lost.
I've tried several of their Hummus variations in LA and while initially I tried to give every justification in the book as to why I'm not loving their hummus.
Finally I had to admit.
The Hummus tastes different.
It tastes more bland.
It tastes more artificial.
It tastes more generic
It tastes like there's more preservatives in it and yes... it even tastes a little bit more plasticky than before.

It's sad when denial ends and you got to face the mirror and say to yourself - I've been dillusional for so long.

I have no idea why after all those years - Sabra has decided to move on from it's loyal base of Hummus lovers and fans.

But that's life.
Nothing stays constant.
Sony used to rule the music world with their walkman.
But there's a new king in town. Who remembers walkman today - it's all about the ipad...

So goes the glory of the hummus world.

Good bye Sabra.
I love you -
But now I must find another hummus to love.
Posted by Dan Katzir at 1:47 AM