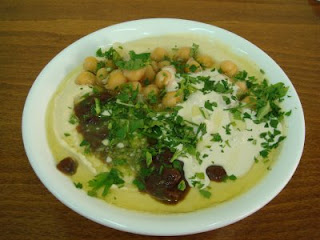 Hummus Place.
There are a few of them around the city. I've never tasted them, but a few people have highly recommended them. They've also received a critics pick by NY MAG:

Hummus to go at Sahadi Market
Damascus Bakery, both on Atlantic Avenue

Hummus place got a critics pick in the NY MAGAZINE. Since it's a magazine we respect and love we're quoting their recommendation and the direct link to the review:

To chickpea connoisseurs, making hummus is a fine art, one they seem to have mastered at this sliver of an East Village storefront where the single-minded menu consists of several thick versions of the Middle Eastern spread, accessorized with puffy pita, pickles, and hot sauce. A proprietary brand of imported white tahini is the not-so-secret ingredient, giving the spread its pale-beige color and ineluctably rich flavor (the hummus operandi tending toward the smooth and nutty versus the coarse and lemony). Purists can order it relatively unadorned, with just a swirl of good extra-virgin olive oil and a dusting of cumin, paprika, and parsley, or up the bean quotient with two variations on the theme: one topped with warm, soft whole chickpeas (masbacha), the other with earthy, slow-cooked favas and a sliced hardboiled egg (called foul, pronounced “fool”). — Rob Patronite and Robin Raisfeld